In the last decade, burglary rates in the United States have fluctuated little with over 2 million burglaries each year. In 2009, nearly three quarters of all burglaries were from residential properties, with over sixty percent being forcible entry. But we all know burglars don't like confrontation—they prefer breaking into apartments and houses when its owners are away. And that's why it's a must for apartment dwellers and homeowners to be on the defensive, even when they're not home.

Earlier this month, a London schoolboy invented a burglar-deterring doorbell that when activated, called the owner's cell phone, allowing them to communicate as if they were on the other side of the door. It's safe to say that burglars will be cautious, so ringing the doorbell before breaking in is a good way to determine if it's empty, making the Smart Bell a great theft prevention tool.

But burglars just don't ring doorbells. They also look through the windows to see if anybody's home, and that's why it's a good idea to get your home's lights on timers, to give the feel of activity inside. But there's a better way to make it look like someone's home other than just having the lights turn on and off automatically, especially since robbers can catch on to this deceiving routine with a few days of surveillance, and it has to do with America's favorite pastime—watching television.

You could simply leave your television on and waste tons of power and reduce the lifespan of your TV set, not to mention potentially giving higher ratings to shows that should probably be canned, OR... you could use FakeTV.

The device is about the size of a coffee cup, but acts just like a 27-inch HDTV—and it isn't just about random flickering light. FakeTV actually presents the illusion of a real television to an outside observer through the curtains, with scene and color changes, fading and motion. It draws as much power as a night light and turns on either by its built-in light sensor or by a timer. 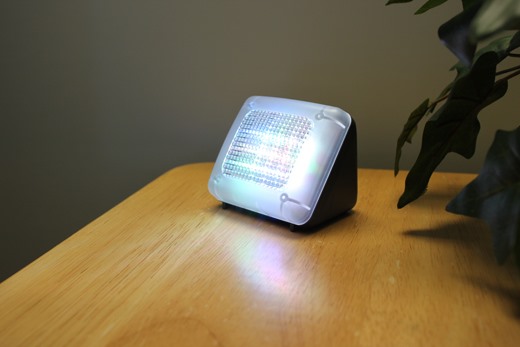 FakeTV isn't anything new (it's been around for a couple years), but it's definitely something to consider when it comes to burglary... unless you have some nasty guard dogs (that should be good enough). It costs about $40.

You know what also keeps burglars away?... The Venus Project and The Zeitgeist Movement.

Free CRT televisions have also been known to mimic television like lighting, and they are FREE on Craigslist...

Real TVs have a lot more flashing and flickering not slow color fading in the commercial. If you have ever been trying to sleep while someone else watches TV you know what i'm talking about.

Free CRTs are also known to make an annoying humming sound, take up lots of electricity, and cause birth cancer in the state of calfornia. Buy a FakeTV as 35 dollar insurance.

I just watched a Parks and Recreation episode where Andy says... "We leave the TV on all day long so that burglars think we're home when we're not. Which was my idea that I'm trying to patent."